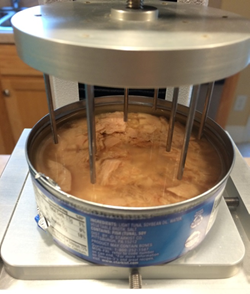 Is this can of tuna of the right texture? Which part of it? Testing for firmness has frequently meant expert but subjective judgment. How can these assessments be correlated with objective measurements for reliable and repeatable testing?

This example shows the method and results from mechanical testing of three cans of tuna in water.

The testing was done using a Food Technology Corporation (FTC) TMS-Pro Texture Analyzer, fitted with a 25 N intelligent loadcell. A nine-point probe was used, to achieve penetration force readings averaged across the whole can. Testing the product in the can ensured that integrity of the sample was maintained.

For each test, the program advanced the probe to touch the sample, and then drove it down into the sample by 10 mm, before returning to the starting position. The sample was then rotated a few degrees for a further test to be averaged in, or for the next sample to be introduced.

Experience will tell where the limits of acceptable firmness lie. The graph reveals more than just a peak force, which can add useful information. These three samples are distributed and the profile of sample A stands out as being noticeably flatter. Consistency in other factors are important here too, including nature and proportion of liquid, temperature, maintaining clean probes, and compression in the canning process.

The same results with additional calculations are shown here, which is more revealing in terms of the coefficient of variation, reflecting the fact that canned tuna is not a homogenous product, and that in this orientation some probes will always encounter interstices.

In principle, mechanical testing of the firmness of canned tuna is measurable with sufficient averaging around each sample. Other tests could be compared, for example a determined sample weight in a standard receptacle, with a given orientation of the flesh and a defined compression surface area. With the right controls, subjective acceptable texture can be defined in terms of objective mechanical measurement, and this data used to create a quick, reliable and repeatable production line test.

The University of Arizona’s Nutritional Sciences Food Lab acquired a Texture Analyzer from Food Technologies about 5 years ago. The company has a great product, which is tailored to food needs.

We have used the Texture Analyzer for both research projects and as a tool to demonstrate to students how food manufacturers can employ objective testing in product evaluation to show how differing ingredients in the same product can affect quality attributes. Its use adds another dimension to the foods labs.

Drew Lambert has been instrumental in helping with set up for testing and providing support whenever there’s a question. He has been a pleasure to work with and is always accommodating with our needs and schedules.  He has even sent us special attachments for special projects.  We couldn’t ask for a better technical support.  Thanks for a great product and great service.

Easy to switch different load cells. Used it for 5 lab sessions for 68 students this semester and performed well.